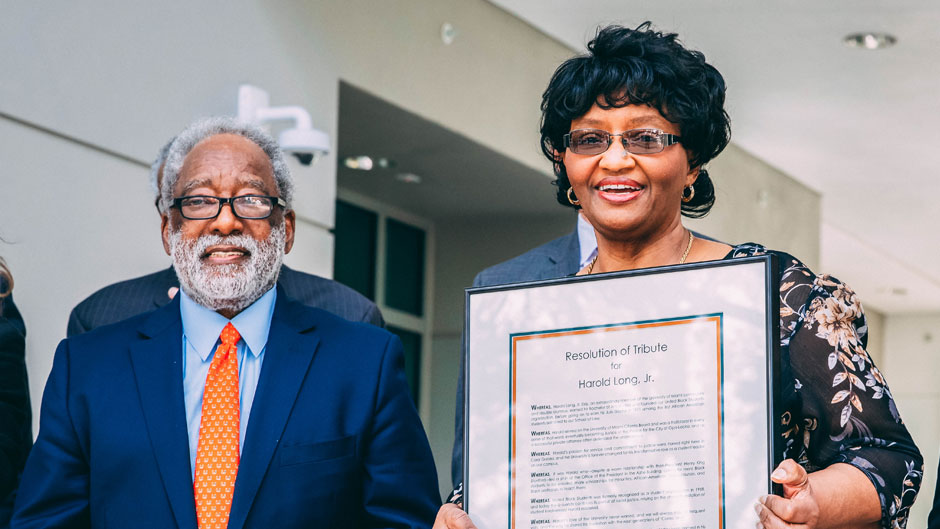 And with that symbolic gesture, the two African-American lawyers – one, the son of longtime educators; the other, a Vietnam veteran who grew up in his grandmother’s gun shack on an Overtown street nicknamed “Bucket Blood” – formed and led what became the first black law firm to set up his office in downtown Miami.

At the University of Miami’s Coral Gables campus, where they both earned law degrees, the two longtime friends were recently reunited by name when the institution dedicated a building in their honor.

The Harold Long, Jr. and H.T. Smith Student Services Building marks a milestone for the university, becoming the first structure in the school’s history to be named after accomplished black alumni.

“Universities have a crucial role to play in modeling racial justice,” President Julio Frenk said, noting an initiative launched two years ago that has helped the institution achieve greater diversity, equity and inclusion. on its three campuses. “We remain committed to creating a fairer society, and the naming of the Student Services Building is another example of our efforts.

As an undergraduate in college in the 1960s, Long broke new ground. He started the United Black Students organization and led a sit-in inside President Henry King Stanford’s office, demanding that the institution enroll more black students, increase scholarships for undergraduates represented, create a curriculum focused on African-American history and hire black professors to teach these courses.

He graduated from law school in 1971, becoming one of the first black students to do so, and then went on to a successful career as a lawyer, including serving as a justice of the peace for the city of Opa-Locka and as a defending the underserved as a private lawyer.

Long died last year at the age of 73.

“He would have been in tears if he had been here today to witness this moment,” Long’s widow, Leslie Long, said ahead of the April inauguration. “He loved the U, and the older he got, the more he fell in love with it. He sacrificed himself and always fought for what he believed in, even if it would have cost him his life.

Smith, a longtime college administrator, recalled his former legal partner as “extremely humble.” The two had practiced law together for a decade, and Smith had always known that Long, as a college student, had led a sit-in in Stanford’s office. But it wasn’t until Smith saw an old newspaper photo of Long in prison that he learned that his colleague, like the civil rights protesters of the 1960s, was so passionate about his cause that he was willing to be arrested for it.

“I said, ‘Harold, you never told me you were arrested for protesting.’ Harold looked at me and said, “That was never mentioned. That’s how humble he was,” Smith noted.

Beginning in the mid-1970s, Long and Smith PA rented offices in One Biscayne Tower in downtown Miami, sometimes representing clients who, unable to afford an attorney, would pay legal fees by rendering their own service. . One woman, for example, was an accomplished cook and cooked them a Bahamian meal of peas, rice and conch fritters, Smith acknowledged.

Their partnership was built on trust.

“We practiced together on a handshake,” Smith said. “We were so locked into each other’s philosophy of practicing law and community service and our connection to the university that we trusted each other enough not to need a contract.”

Smith served more than a year in Vietnam, returning to Miami in 1970 with dreams of enrolling in law school at the University of Miami and becoming a lawyer who would advocate for the rights of the weak and marginalized. But he faced two hurdles: Classes would start in just two weeks, and he hadn’t even taken the Law School Admissions Test (LSAT).

Determined to start classes this semester, Smith drove to the Coral Gables campus and, without an appointment, met with the law school dean, telling him that the LSAT was not given to soldiers who were fighting and were dying in Southeast Asia. “I’m going to be in law school this semester — first class, first row, first seat. This is what I have to do,” Smith told the Dean.

Impressed, the dean came to an arrangement. He would admit Smith on one condition – that he pass the LSAT the next time the test was administered. And Smith did.

The Student Services building, which opened two years ago and recently achieved LEED Gold certification for its sustainable features, is a one-stop-shop for students offering services that include housing registration, financial aid and educational guidance under one roof.

“My name on this building is an incredible honor,” Smith said. “And having him appear with my only legal partner, Harold Long, is like playing the lottery – a million to one.”