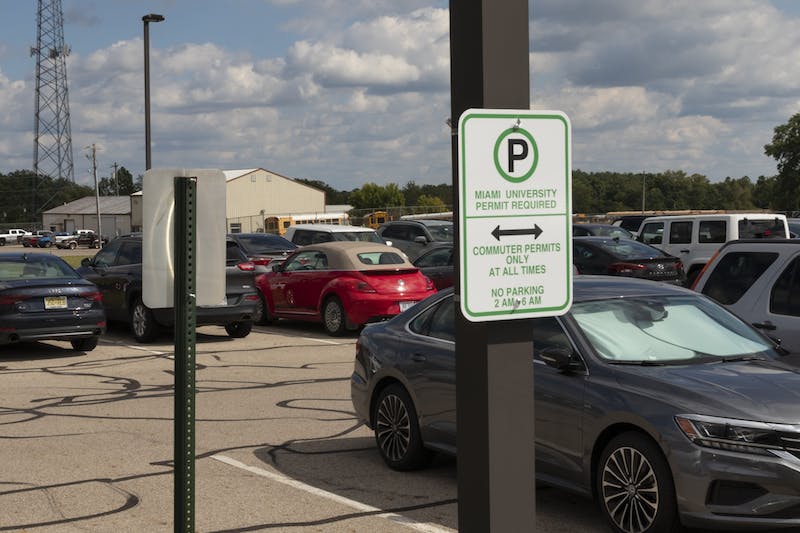 After the University of Miami announced a new zonal parking system, some students are confused, but Miami officials hope the change will help decongest lots.

The changes came in early August and split commuters and residents between three outer lots: Chestnut Fields, Ditmer and West Millett. Freshmen are required to park on the West Millett grounds. However, higher classes can purchase a permit for Ditmer or Chestnut Fields.

In previous years, students could purchase a permit for any land.

These commuter and residential parking areas are marked with signs at each lot, and additional parking is available for anyone with a Millett parking pass.

All parking permits can be purchased daily or per semester. Another novelty for this semester is the daily pass; previously, students could only purchase one-semester permits.

Andy Rosenberger, director of parking and transportation services, said that in previous years, the Chestnut Fields and Ditmer lots filled up quickly compared to the West Millett lot, causing traffic congestion and frustration among commuters.

After studying three different parking systems used by other universities, the zonal system was adopted with the aim of reducing traffic and minimizing carbon emissions.

“That’s the goal,” Rosenberger said. “To make sure that when you come to campus and you know what field you’re going to, you know there’s going to be a place for you.”

For some students, this new parking system is inconvenient. Paolo Papalia, a first-year finance student, lives on Western campus but has to keep his car at Millett despite his proximity to Ditmer.

“Ditmer is easier for me to park,” Papalia said. “I think what they should be doing is assigning each student based on where they live.”

Some members of the upper class also dislike the location of these outdoor lots. Daniel Coates, a political science student, lives off campus but cannot use his car due to the distance between these grounds and his classes.

“Whenever I have to go to campus for something, my options are very, very limited,” Coates said.

Additionally, students parked on the West Millett grounds must move their vehicles prior to home football games.

Rosenberger said that compared to other universities, like Oregon State University, Vanderbilt University and University of California-Davis, these drawbacks are minor. Butler County Regional Transit Authority buses make frequent stops to pick up students from Millett, and all legal spots on campus are free student parking throughout the weekend.

“What we’ve found is that some of these other universities are requiring their freshmen to walk double what we’re asking students to walk,” Rosenberger said.

Since the implementation of the new zone system, parking enforcement officers have sent several emails and warnings to residential students parked in the wrong zone. Last week, agents began ticketing.

Despite some confusion, Rosenberger said the new system appears to be working.

“We drove and there’s not an outside lot where there’s no parking lot,” Rosenberger said. “There is room for everyone: commuters or if you are residential.”

However, Papalia said he had difficulty with the new zonal parking system and the suburban and residential sections were difficult to distinguish, despite the signage on the lots.

“Ditmer is much better designed because a corner of the parking lot is reserved for commuters and it’s separated by the actual road path,” Papalia said.

Although the students received an email detailing the new parking changes, Papalia did not see it and received several warnings before receiving a $75 ticket after parking in the wrong parking lot and wrong zone. .

For students confused about a recent warning or ticket, Rosenberger said they should contact campus services and appeal.

“What we’re trying to do is manage a complex parking system to get people to follow the rules,” Rosenberger said. “If you follow the rules you should have a place to park because that’s how we designed it.”