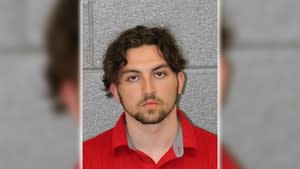 A charter school in Charlotte took extra precautions for its graduation Thursday night after police charged an 18-year-old student with one count of threatening mass violence at an educational facility, according to arrest records.

Records show Charlotte-Mecklenburg police arrested Bradford Preparatory High School student Jacob Lawlor on Wednesday. According to an arrest warrant, Lawlor texted another student threatening to protest the graduation and shoot at the ceremony.

The principal of the charter school told parents a threat was directed during the graduation ceremony Thursday night at the Atrium Health Ballpark. The school principal also credited the “See Something, Say Something” app for the tip, leading police to investigate and arrest Lawlor.

Lawlor was booked at 5 a.m. Wednesday and was initially released just under six hours later on $2,500 bail, according to an arrest record.

Then on Thursday afternoon, an emergency hearing was called and a judge ordered that Lawlor be remanded in custody until noon Friday – after the graduation ceremony.

Daniel Redford, a member of the Mecklenburg County Fraternal Order of Police, said Lawlor should never have been released.

“It is a failure at the highest level of our judicial office here in the county of Mecklenburg,” he said.

The district attorney’s office also agrees. Under state law, if someone is charged with threatening mass violence, the DA’s office said they were supposed to have the opportunity to plead release terms in front of a judge, not a magistrate.

“God forbid if he would have gone to that graduation tonight and done exactly what he said. How would that magistrate feel knowing he let him out breaking the law” , Redford said.

The law and the bond

Under North Carolina law, the magistrate had no authority to set bond in this case, as Lawlor was charged with threatening mass violence.

“It’s a clear indication to us that the legal authorities here in Mecklenburg County are making their own rules,” Redford said.

‘There are a number of limited circumstances in our statutes which do not permit magistrates to set conditions of release for criminal charges, ensuring that bail shall not be set without giving my office an opportunity to be heard’ , the district attorney’s office said, in part. , in a report.

The prosecutor’s office urged all judicial officials to abide by the law.

“They can’t even follow the law,” Redford said. “The district attorney’s office shouldn’t be reminding our judges to do that. It is clearly written. »

The list asks judges to consider various circumstances that would prevent a defendant from getting bail, such as gang activity, domestic violence charges or access to a firearm.

It does not ask judges to consider threats of mass violence, which under state statute requires a defendant to be held in jail until they can appear before a judge in the state. district court.

This did not happen in this case.

When Lawlor was back in court on Thursday afternoon, his attorney argued he was joking and upset that he couldn’t show up for graduation because he had to take a math class this summer. . Lawlor’s attorney said no weapons were found in his home and his family did not own any firearms.

Police also found no indication that he had a plan.

“It’s not something that we can forget, laugh about it and just say, ‘I hope it doesn’t happen,’ because that’s when they happen,” Redford said. .

Lawlor’s attorney said he helped care for his disabled mother and was considering joining the Coast Guard.

Lawlor was missing a credit to graduate, which is why he texted about the threat.

His attorney, Aaron Lee, said the text was a joke and taken out of context.

“He’s not a threat to the school, to society,” Lee said. “He doesn’t want to hurt anyone or anything.”

“My daughter was born premature. She was born one pound, 8 ounces, and was given a 50-50 chance of surviving and a 50-50 chance of having brain damage,” Chrispin said. “Her walk down that aisle is, like, she just fought hard and beat all the odds.”

In a statement to Channel 9, a spokesperson for Bradford Prep said the following:

“We are aware of the arrest and have worked with the Charlotte-Mecklenburg Police Department who have been very helpful. At this stage, any further questions should be directed to the CMPD.

“The district attorney informed me of specific circumstances in which magistrates acted to set release conditions without authorization. Laws that remove magistrates’ power to set release conditions were not consistently followed. In March 2022, all criminal magistrates in Mecklenburg County were ordered by the Chief Justice to complete five (5) hours of intensive training in North Carolina bail law. Use of our local decision-making tool (Findings of Fact Form) Magistrates were required to use this tool from April 1. The evaluation of the changes in practices and their effectiveness is in progress.

“There are a number of limited circumstances in our statutes which do not allow magistrates to set conditions for release on criminal charges, ensuring that bail should not be set without giving my office an opportunity to be heard. On the dozens of occasions this year when these laws have not been respected, we have repeatedly brought this to the attention of the judicial authorities in charge of oversight and requested, with mixed success, that the matters be reconsidered in court. public. Court officials have suggested some best practices to try to eliminate these occurrences, and we hope they will succeed. In the meantime, we continue to urge all judicial officials to obey the law.

No further details have been disclosed at this stage.