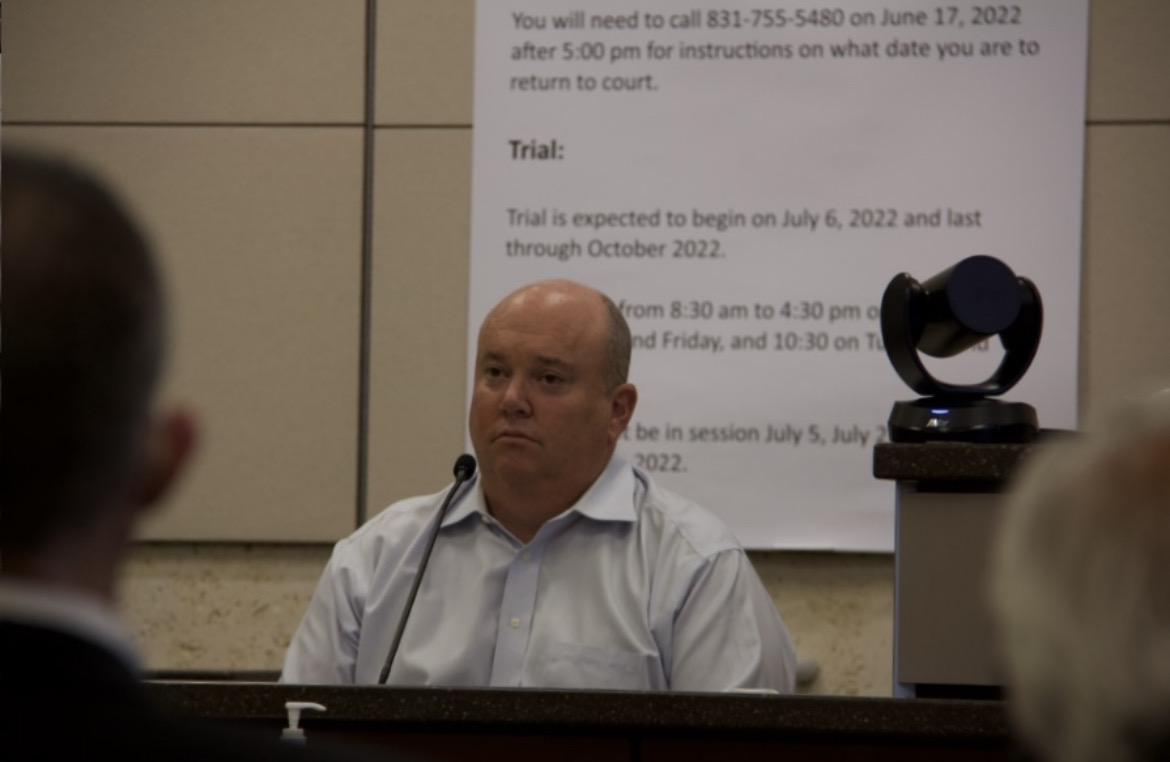 Tim Davis, a 1996 Cal Poly junior, is one of many alumni who testified to the off-campus party where Kristin Smart and Paul Flores attended the night she disappeared. Still, his role in the case made him “relive that night for 26 years,” Davis said.

Davis spoke at the People v. Flores on Monday, sharing her memories of Smart at the party and helping to drive her home that night.

During a preliminary hearing in 2021, Davis said he saw no one other than Flores as “the culprit in this case.” On Monday, Davis reiterated that sentiment.

Speaking on Monday, Davis said the party celebrated the birthdays of two people born one day apart. Most of those present were close friends of Davis.

When Davis testified Monday, he confirmed seeing Kristin Smart at the party, alone, and identified a photo of her.

“At one point … I remember looking back and Kristin Smart was on the ground and Paul Flores was next to her,” Davis said. “It looked like they had fallen to the ground.”

Davis recalled standing a few feet away from Smart and Flores. Smart lay with Flores across from her, the two laughing together. It was one of the “rare” times Davis saw Smart and Flores together at the party.

During the July 22 trial, former student Kendra Koed testified that when Smart fell, Flores was standing over her, not lying beside her. Other former students testified to the “commotion” of Smart’s fall, none of whom remembered Flores falling with her. Davis added that he didn’t watch her all the time at the party, so “she could have fallen a few times.”

“I remember the whole night vividly…I didn’t drink enough to feel like I was drunk,” Davis said. “I had to relive that night for 26 years because of this case.”

Eventually, the two people whose birthday it was went to bars downtown, leaving 15 people at home. Many of those remaining were freshmen returning to their dorms.

Davis drove to the party, then let a friend drive his car after driving several people home, including Davis’ college girlfriend and now wife.

Before returning home, Davis saw Cheryl Manzer, formerly known as Cheryl Anderson, a friend of his. Near Manzer was Smart, lying in the overgrown grass. When he saw Smart, Davis “quickly realized that she was in no position…to do anything.”

Soon in the march, Flores joined all three of them, Davis said. Davis thinks Paul Flores walked out of the house through the backyard door, saying Paul Flores “just came out of the dark a little bit.”

After walking about 100 meters to the health center, Flores said, “I got it from here.” Davis said Manzer told her she would walk with Flores and Smart home since Davis lived in the opposite direction.

Davis gave Smart to Manzer who confirmed that Davis should leave, with Flores then supporting Smart’s weight which looked like a “sack of potatoes”, Davis said. As they walked, Davis does not recall seeing any other groups ahead of them.

Davis did not know where Smart lived, but remembers Manzer telling her that she knew Smart and knew that Smart lived in the dorms. Flores did not ask Smart where she lived, Davis said.

Jeremy Moon, a high school student from Arroyo Grande High School in 1996, was friends with Paul Flores for two years at that time, and the two dated from time to time. Over Memorial Day weekend, Moon and Flores spent time together, although Moon said he couldn’t remember what they did.

On Sunday, May 26, Moon noticed that Flores had a black eye.

“He said he woke up with it,” Moon said.

The next day they played basketball with two other people.

Asked by San Luis Obispo Assistant District Attorney Christopher Pevrelle about Flores’ bruise, Moon said he didn’t recall Flores or anyone else being punched in the face during the game. . Flores didn’t mention that Smart was missing, or that he was the last person to see her, Moon said.

Lawrence Kennedy was an investigator for Cal Poly Police in 2003 and a police officer for over 18 years. He was assigned to Smart’s disappearance in May 1996, contacted on the Monday of Memorial Day weekend.

On Tuesday, May 28, Kennedy interviewed Flores in her room at the Santa Lucia Residence.

Flores “basically said he didn’t know who [Smart] was,” Kennedy said of the interview.

“He was a little nervous…I noticed his breathing was a little, uh, heavier than normal,” Kennedy said Monday.

Flores told Kennedy that his nervousness was due to the fact that he had an outstanding warrant for driving without a driver’s license, which he had dealt with the day before, Monday, in Arroyo Grande.

In this interview, Flores said he returned to his hallway after dropping Smart off somewhere around the intersection of Perimeter and Grand Avenue and took a shower, talked to another student in the hallway, and then left. finally slept at 5 am.

Kennedy never found the student Flores said he talked to in the hallway before he fell asleep that night.

The following interview took place this Thursday, May 30 at the police station, where Flores repeated that the only physical contact he had with Smart was two hugs.

During this interview, Kennedy noticed “some kind of scratch” on one of Flores’ knees. San Luis Obispo Police Lt. Robert Cudworth suggested Flores may have had the injuries while playing basketball.

Flores later told detectives he got those scratches while playing basketball, but Kennedy noted he only said this after hearing Cudworth suggest it.