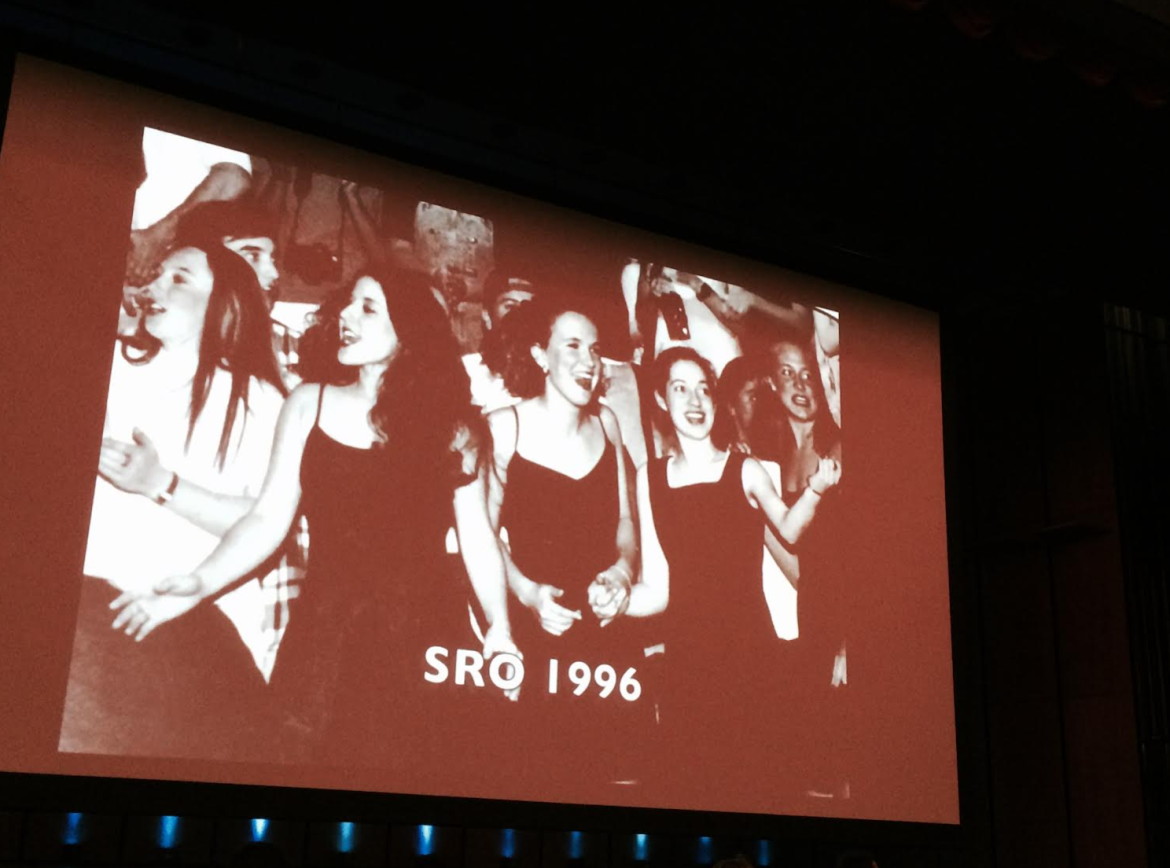 By: William A. Thompson
In: Student permit
Tagged: high school

At Thursday’s Board of Education meeting, GHS Senior Class President Javier Serra said it was bittersweet news that Standing Room Only, better known as SRO, did not would not take place in 2022 due to a lack of registrations.

“Miss Foster and the SRO Chairs have worked tirelessly to recruit participants for this long-standing GHS tradition,” he said. “But according to a survey of students, there just wasn’t enough interest.”

“While this may be grim news for many here tonight, we are committed to creating a new tradition, where the entire senior class will come together before the curtain closes on our stay at 10 Hillside,” Javier added.

SRO was a decades-old tradition that began when GHS was located on Field Point Road. Each year, hundreds of seniors have taken part in the show, which was written, directed, choreographed and performed by students.

Originally called Senior Vaudeville, the show served as a fundraiser for the senior class and was often used to offset the cost of prom.

It seemed that, each year, the sketches reflected the difficulties of the day. In hindsight, the complaints seem like minor inconveniences.

In 2014, with the SRO theme “A Series of Un’14Ate Events”, students performing in the “Old Auditorium” mocked the illegal parking permit trade that resulted from the construction of MISA, which has causes juniors to lose the possibility of parking at school.

In 2016, students paid tribute to the history of SRO, with a slideshow including photos from decades of shows.

The Class of 2020 performed their “2020 Vision”-themed show on March 5-6, just in time. The onset of the pandemic upended plans, and the district closed on March 12.

Then, unfortunately, there was no show in 2021.

But even before 2020, participation in SRO was in decline.

Some thought the reason was lack of school spirit, but it is more likely that students have so many activities to choose from and simply have less free time.

Likewise, after the band’s requirement for band students ended and people failed to see them in the St. Patrick’s Day Parade, there were suggestions of a lack of spirit. school. But then came the Cardinal Crazies, initiated by students.

On another note, Javier told the council he was excited by their unanimous vote to make masks optional in schools effective March 1, 2022.

“Given our high vaccination rates and low cases, I can’t wait to see everyone’s faces again,” he said.

“I’m personally thrilled to see everyone’s faces after what feels like an eternity,” he said.

“However, it’s equally fair to say that our feelings aren’t necessarily the norm,” Kwame added. “While many students are eager to move forward and deal with Covid, many are still fearful of a possible future of unknown variants and spikes in cases. While some may think that making masks optional will polarize our student body, I’m more than confident that empathy and understanding will replace their vision.

“If we can take anything away from the last two years of this pandemic, it would be the ability of our community to sacrifice and care for each other and the common good,” Kwame added.

The student body president responded to the state-mandated homeroom courses that were added to the curriculum this year.

“It’s meant to create bonds that last the duration of high school,” he said. “In many ways, the main class is working towards this goal, with activities and resources provided by the administration. However, the Greenwich students believe there is room for improvement. If the fundamental purpose of a main class is to create a more intimate community within our larger GHS community, then the activities should be casual and meaningful for the students to enjoy collectively.

Kwame suggested that playing a game of UNO or charades with peers would result in a more cohesive community, rather than individually completing missions that have little to do with the GHS experience.

Ms Perrone said she was also delighted with the optional vote on the mask.

However, she said the whole community had been in a state of trauma for two years.

“I don’t think we can just flip an internal switch and say everything is fine as if nothing was wrong,” Perrone said. “We need to engage the conversation and check if we are all doing well. …We have all witnessed the traumas and divisions that have occurred in our community. Everyone has suffered in one way or another.

Perrone said each family has a different situation and young children may not understand the turn of events.

“We may not know what is happening in each individual’s home or with family members, parents, students and teachers whose health is compromised. Our young children may not understand. While talking with a few parents, they shared how they told their kids it was okay to take their masks off, but their kids said they wanted to keep them on anyway. Is it fear? Anxiety?”

“Things have not returned to normal,” added Perrone. “We need to be there as a community of caring humans and supportive through the transition.”