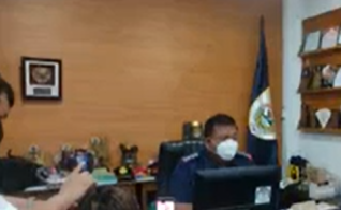 CITY Police Director Colonel Alberto Lupaz has revealed they have prepared a murder charge against the doctor who fatally shot a 21-year-old student during a bar fight over the weekend.

However, at the time of this writing, there have been no investigative proceedings against Dr. Marvin Rey Andrew R. Pepino, an undercover personnel assigned to the Davao Regional Police Office, since the suspect has requested a preliminary investigation into the case.

A preliminary investigation is required to determine probable cause.

Lupaz added that Pepino will also face a charge under Sect. 31 of RA10591 (Illegal possession of firearms) as he does not have a license to carry firearms outside the residence (PTCFOR).

In addition to criminal liability, the Regional Investigation and Detection Management Division (RIDM) is also conducting a parallel investigation against the suspect for administrative liability.

He said the division will eventually release the results of its investigation in two weeks and that his liability amounts to a discharge from service.

Lupaz also dismissed the insinuation that they were giving the suspect special treatment because they hadn’t released his photo ID.

“We protect the interests of both parties. We do not know ano yung possibly mangyari (which could happen). As much as possible, makalat ang hindi picture (images will not be widely distributed) for security reasons. Pero pwede naman kumuha basta papayag ang mga avocado nila (You can get the photo if the lawyers allow it) but for the PNP part, we allow it,” Lupaz said.

He claimed that the victim came from a prominent family, his lawyer brother being linked to the Audit Commission. “I’m not insinuating. Suspicious Kahit siya, he is under our protection. He’s already in jail.

Based on the initial investigation, the two, who were members of two opposing groups, got into a heated argument inside the bar.

The commotion prompted the San Pedro station to send another policeman, Cpl. Ropel Gersalino, who tried to pacify both sides. However, the opposing sides ignored the cop as they exited the bar and started punching each other.

Sensing that the victim’s group was “superior in strength”, Pepino drew his gun and shot the victim several times. Witnesses immediately took the victim to a nearby hospital, but doctors pronounced him dead.

Investigators were able to recover a 9mm handgun believed to have been used in the crime as the suspect was brought to the San Pedro police station for detention.

Meanwhile, Mayor Sebastian ‘Baste’ Duterte plans to implement a tougher policy on alcohol prohibition under Order No. 004-30 Series of 2013, which amended Order No. °1627, following the shooting incident at Lugar Bar on the corner of V. Mapa and J Rue Camus Extension last Saturday.

The mayor told reporters at a Monday news conference at City Hall that they needed to step up implementation.

“We all know, bago lang tanan nakagawas sa pandemic and mediocre resistant pa ang mga tao muoli ug balay giaganahan mulaag kay during two years, wala sila nakagawas gawas (Everyone is maximizing their chances of leaving their homes due to the pandemic, so they are reluctant to return home early),” he said.

“But I guess kung striktohan ang Implementation her ban alcohol, we can prevent these incidents from happening because when people are intoxicated by alcohol, bad things can happen at any time,” he added.

However, Duterte asked for some time to review some of the existing laws. “The executive order will stand until we can see what the adjustments are. As I said, this is my first day in office. I have to observe how people react to the orders of our laws, so I have to see them again, so you have to give me time,” he added.

He said offending establishments’ licenses could be revoked if they breach the liquor ordinance.

Warning to the bars

For his part, Lupaz also called the attention of bar owners to put a warning sign on their doors that prohibits the entry of firearms.

“They also have to position a security guard to check people going inside just to make sure there won’t be any firearms allowed inside,” he said.

He admitted the pandemic had hampered enforcement, but the police officer promised tougher enforcement to prevent the shooting from happening again. He said that instead of 1am, the ban will start at midnight.