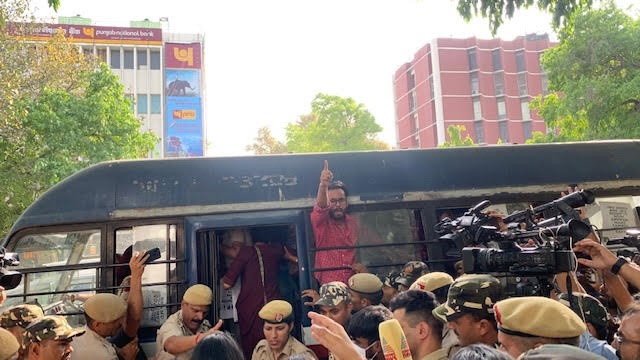 Delhi: No one can dictate what we should eat,” say student protesters over JNU violence

The protesting students argued that members of the Akhil Bharatiya Vidyarathi Parishad (ABVP) – the student wing of the Rashtriya Swayamsewak Sangh – resorted to violence over the issue of non-vegetarian food consumption on campus during the Ram Navami. The students were then taken to Chanakyapuri and Tughlak Road police stations for pre-trial detention.

Delhi Police has registered an FIR on the complaint of left-wing student groups – Student Federation of India (SFI), All India Student Association (AISA), Federation of Democratic Students (DSF) – and the Jawaharlal Nehru University Students’ Union (JNUSU) against “anonymous” members of the RSS-backed ABVP under sections 323,341, 509,506 and 34 of the Indian Penal Code.

Yashita Singhi, a student at Ambedkar University, said NewsClick youThis incident scared her about the fate of other campuses in the nation’s capital.

“I study at Ambedkar University, and the episode scared me to the core of the idea that one day a lumpen would come to our tables to dictate what we should eat. This is totally unacceptable for us. I think our right to freedom is threatened by such incidents,” she said.

Aseed Karim Hussain, a student at the Delhi School of Economics, said NewsClick that the attack must be seen in context the majority of the country’s residents are not vegetarians.

“I come from a state with a wide variety of non-vegetarian foods. We have eaten meat all our lives. a culture. Our Constitution allows us to consume whatever we desire. Using brazen violence to silence all opposing voices is not acceptable,” he said.

Earlier in the day, JNUSU in a press conference said it had lodged a formal complaint with the Delhi Police asking for the arrest of the culprits. Showing his wound, Harendra Sheshma said he was beaten with batons, rocks and windshield wipers as Delhi police officials stood silent onlookers at the violence.

“ABVP members kicked out the chicken vendor under the excuse of Ram Navami when he came to Kaveri Inn to deliver the supplies. When we suggested let them eat food first vegetarian then non-vegetarian food that too Later they started attacking the students I too was attacked with truncheons Their audacity could be gauged by the fact that the mess secretary was also attacked attacked. The manager also clarified that there was no ban on serving meat,” he said.

Sheshma added that on Sunday afternoon, they got information about some ABVP men abusing Kaveri Inn mess committee members. There were videos purporting to show them disrupting the functioning of the mess and threatening members to cook non-vegetarian food.

“Receiving consistent messages of a tense situation in Kaveri, JNUSU became aware of the problem and condemned the physical brutality with which the ABVP goons were reinforcing their communal politics. A call for a meeting of all organizations was was launched to oppose these discriminatory discriminations. As usual practice, as decided during the general assemblies of the hostels, vegetarian and non-vegetarian foods are included in the menu of the hostels on certain days. For years, students have been eating meals according to their personal choices, and there was no problem,” he said,

Sheshma, also Unit President of SFI, JNU, said: “On the night of April 10, when dinner was to be served, the goons of ABVP gathered in large numbers in the mess of the hostel. Kaveri to demand that only vegetarian food be served.When the students resisted this outright violation of their right to food, the ABVP intimidated the students and violently attacked them using laathis in wood, tube lamps and many other sharp objects, then targeting militants and seriously injuring students.Akhtarista and Avijit were also injured.Akhtarista suffered a severe blow to the head when ABVP goons attacked him. hit with a tube light,” he said.

“Not only did they attack the students and the militants, but they also blocked the doors of the hostel afterwards, preventing any student who tried to escape from fleeing. They were openly terrorizing all the students present there. , using community slogans like ‘Bharat mei rehna hoga to Jai Shree Ram kehna hoga‘. They surrounded the ambulance and did not allow the injured students to be taken for medical treatment. This all happened while Delhi Police and Cyclops Security were present there,” he said.

He alleged that female students had been threatened with rape, sexually abused, groped, sexually assaulted and beaten as Delhi police remained a silent onlooker. “Students have repeatedly requested the Delhi Police to arrest the perpetrators but to no avail,” he added.

Akhtarista Ansari, who received stitches in her forehead, said she was hit by a rock inside the hostel. “Many students were injured and were transferred to AIIMS and Safdarjung Hospital. We heard that the chicken vendor was kicked out of Kaveri hostel. Students gathered outside the hostel at 8 p.m., when members of the ABVP were already present. They started attacking the students with stones, sticks and truncheons,” she said.

“Students are also warned to refrain from getting involved in such incidents which disturb peace and harmony on campus. If anyone is caught engaging in such acts, they will be liable to disciplinary action in accordance with university rules,” he added.

A University press release also clarified that there is no ban on serving non-vegetarian food; the student committee runs the mess and the administration has nothing to do with their menu. It read: “There was a fight on the JNU campus on April 10, 2022 between groups of students. It was the occasion of Ram Navami and a Hawan was organized by the students of Kaveri hostel and there were students who opposed it. Principals and deans of students tried to calm the students down and Hawan ended peacefully. Despite this, some groups of students were not happy with this and soon after, at dinner time, a ruckus was created there and heated arguments were followed by an altercation between the two groups of students. students. The guards clarified on the spot and issued a notice when the rowdiness was taking place among the students that there was no ban on serving non-vegetarian food.”

However, the version was fiercely opposed by SFI members who claimed that the circular issued by the JNU administration reads more like a piece of propaganda aimed at inciting communalization inside the campus using lies. They alleged that the circular attempted to shift the seriousness of the problem from the violent attacks on students protesting the ABVP’s restriction of their food choices to an incident (the Hawan) which never happened. Allegations of disruption of the Hawan organized inside the Kaveri hostel by the administration are flat out fake, SFI said.