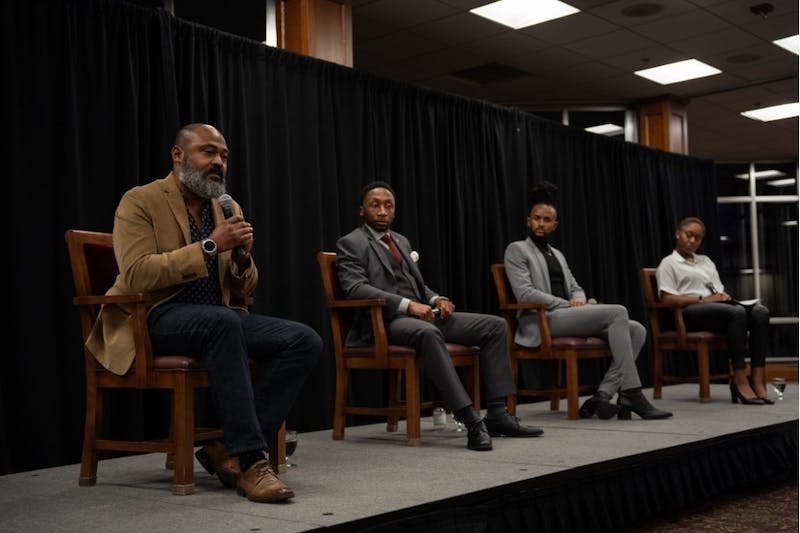 On Thursday, IU Student Government and the Black Student Union hosted a panel discussion on the evolution of leadership. The roundtable was led by Ariyonna Cousins, UI Senior and BSU President. On the panel were four of the five black student body presidents IU has had throughout its history.

According to their website, IUSG has served IU for over 100 years since the first student council in 1912.

Although the number of black student body presidents has been small, the impact they have had on this campus has been remarkable.

From 1960 to 1961, Thomas I. Atkins served as IU’s first black student body president and the first to hold that office at any Big Ten school.

During his tenure as IU Student Body President, Atkins served as one of twelve members of the Aeons Board of Trustees and was the first IU student to receive the U.S. Experiment in International Living Scholarship.

Related: [Black Voices: Black fraternities and how they benefit universities]

Atkins created a legacy that has a lasting effect to this day as a living center of learning was created in his honor.

Keith Parker served as IU’s student body president from 1970 to 1971 and helped form the African Studies program at IU.

While serving as student body president, Parker was also a member of the Black Panther party and helped establish food banks and daycare centers on the IU campus.

As student body president, Parker did not have it easy in his role and said his biggest challenge was to survive.

“Our main issue, which was a national issue at the time, was recognizing not only that students had a voice, but that they had a right to have a voice,” Parker said. “We raised hell.”

Johnson is proud of himself and his administration for completing campus bus service, which was a challenge prior to his tenure.

Related: [Ask Black Voices: What is being in a relationship like for a college student?]

Johnson said he would do his presidential experience again and was enjoying his time in the role.

“You create your own opportunity,” Johnson said. “I didn’t wait for anyone to allow me to pursue the goals I set for myself. I just went and grabbed them.

Johnson was convinced by white students to run for student body president and felt he could better represent them.

After Johnson came Michael Coleman. Coleman served as IU’s student body president from 2010 to 2011, and his administration worked on several campus resources that still exist to this day.

Coleman and his administration are proud of the success of DoubleMap and the fall break.

“We were using cell phones just so we could track buses by GPS so you could tell where the bus was based on where the phone was,” Coleman said.

Coleman said one of the struggles of diverse leadership is the economy.

“As executives, we’d be making between $3,000 and $4,000 a year,” Coleman said. “Being a Groups student and my parents never going to college, I was supposed to be the one who made it out of college. For me to say I wouldn’t take the stipend didn’t seem like be a possibility.

Our current Student Body President, Ky Freeman, connects all Past Presidents in a way that their legacy continues through him.

The Freeman administration works to increase campus safety primarily through sexual assault awareness as well as in the area of ​​diversity, equity, and inclusion.

“My greatest accomplishment was that message of radical love even in times when people didn’t love me back,” Freeman said. “I naturally want to protect people and in that protection is making sure that I face it so that others don’t.”

Freeman has used his voice and administration to bridge the gap between the many lived experiences of the diverse people who represent all spectrums of the world at IU.

Black history at IU is quite rich, not monolithic, and collectively powerful.