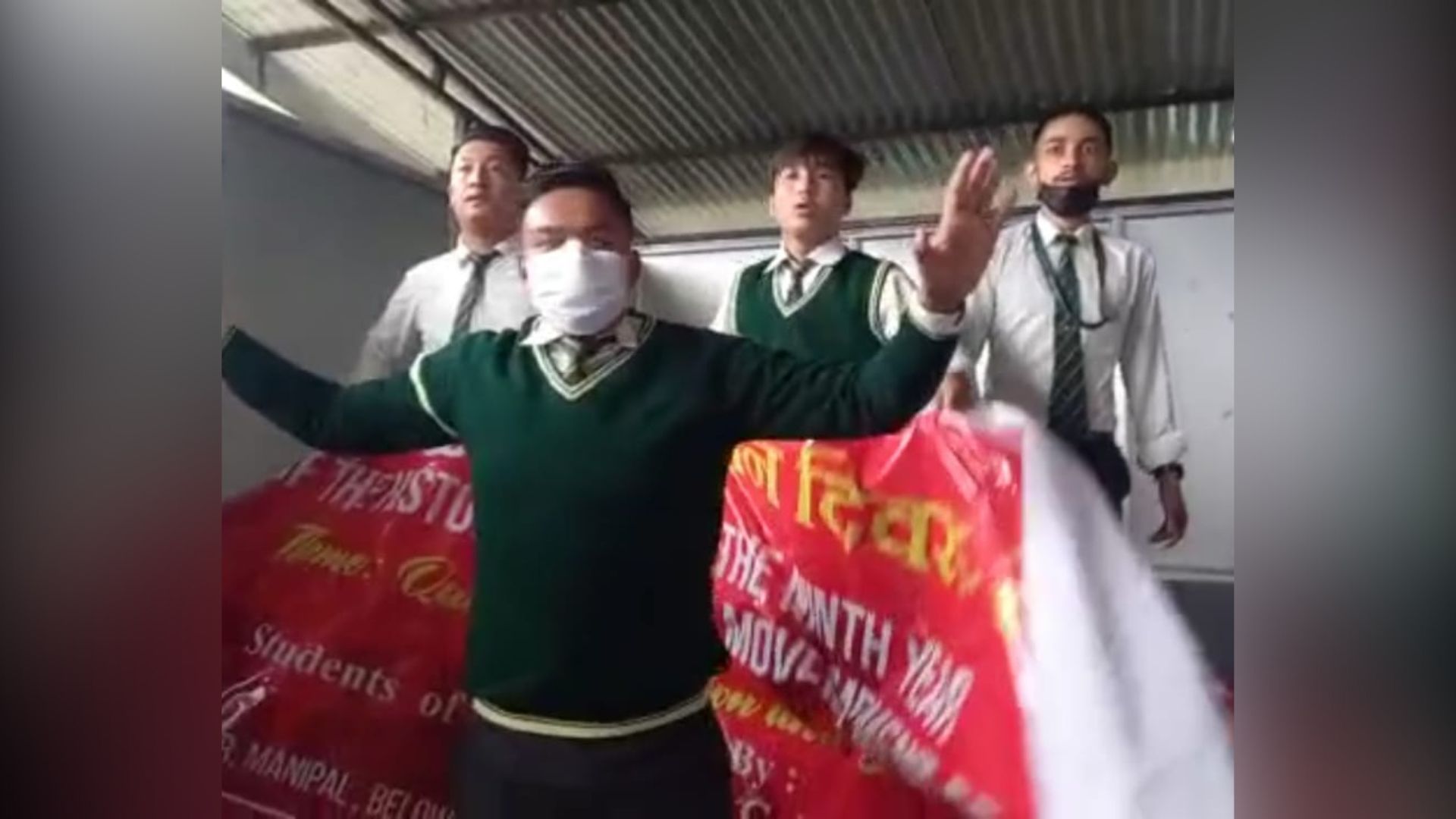 Gangtok: A chapter of Nar Bahadur Bhandari Government College (NBBGC) students had converged on a local hotel in Gangtok with the intention of holding an event to mark the 8th anniversary of the infamous student movement of 2014. But even before the event could not begin, another section of college students clashed with the student organizer, claiming the event had been “politicized”.

The ensuing verbal clash between the students ended in the tearing of the event poster and the event did not take place. The guests at the event, according to one section of students, were “student protesters of 2014”, while the opposing group referred to them as members of the Sikkim Progressive Youth Forum (SPYF), a socio-political organization in Sikkim.

Undoubtedly, as the media saw at the event, many SPYF members were present. While it was equally difficult to differentiate who these 2014 alumni were present at the event. Eventually, the guests had to leave, as did the members of SPYF as the argument between two groups of students heated up.

According to the student organizers of the event, “We had come together with the purpose of celebrating the 9th year of a historic (student) movement which occurred in 2014. The students were then tasked with lathi and the movement s was produced to counter the rising fees. The struggle of students to counter had led to lower tuition fees, and subsequently, the academic fees were made free. To this day, students enjoy free education Therefore, we had gathered to celebrate the day, giving respect to these former students, we had invited them.

The students further informed among the more than 4000 university students that they were not able to reach everyone. “Those we were able to reach, we sent them a message. But some students told us that the event should have taken place either at college, they doubted our intention. They tore down the banner of the event, which we condemn. We are not affiliated with any party. We are not politically sane. But due to a certain section of students, we are forced to cancel the event. It’s sad that we are not associated with any political party, but as general students, we wanted to make the event.

The opposing students had questioned the student organizers to find out where they had obtained funds to organize the event, to which the students justified themselves: “Among these former students, some became lawyers and teachers, we had collected from ‘them. As students, it is very difficult for us to generate funds. It was a minimal contribution with no amenities that we could provide at the event. But only with the intention of organizing and observing the anniversary event. The intention was to give them respect and carry the same process for future generations. It was our only motivation. »

The students further substantiated that holding the event was not a crime. “We believe that observing the event would not damage the reputation of the college. It was just to commemorate the movement but not a new movement per se. It was not a protest rally, we were not defaming the college. We had invited all the colleges, some came in regular outfits and not in college uniform. This is celebrated at Namchi College, Geyzing College, that’s why we wrote “all government college”. Therefore, the banners were similar in different colleges. We also felt that it was not necessary to inform the heads of the institutions because this event was taking place in a commercial place. If it was a move, we might have asked permission, but since it wasn’t, we didn’t.

When asked why SPYF members were involved, the students replied, “The members you saw today, they were active participants in the college movement in 2014. It was just them we invited , not everybody. We had also invited lawyers and professors and they were with us. But once the students saw SPYF members, they ended up politicizing the event. We welcomed them as students who were part of the 2014 struggle and not members of the SPYF. It was supposed to be apolitical.

Only NBBGC students joining the event in Gangtok, the students claimed, “We had invited students from Gangtok Law School, but they had other events going on today and tomorrow, they couldn’t join us.”

The opposing students, while speaking with the media, claimed they did not know the background of the event. They said, “We were invited with the intention of respecting our former students. But once we reached the event, we learned how our college friends were misleading us. They were trying to fire a shot from our shoulders. They were listening with the intention of talking politics. There was no question of honoring former students. They claimed students from all government colleges, but even among the organizers there were only two students. We suggested to them that this event take place in the auditorium of the college rather than in a hotel. If it was a funding issue, we could have handled it, but after coming here, we found out the event was funded by SPYF.

Opposing students also claimed that the College’s Student Representative Council (SRC), but even the SRC was not involved in the organization. They claimed the event was the product of just two students. “Before the event, the students among us were talking about the event and that’s when we learned that the event had the presence of members of the SPYF. The banner speaks of honoring the former students, but we wonder if those who deserve this tribute are only members of SPYF?Therefore, we believe that the event is organized 100% by SPYF.We are not against SPYF, but we believe that a tribute to alumni should only involve students and no one else should be involved.

Opposition students also claimed they had no plans to hold a tribute event that day. “We had planned to hold ourselves in the College auditorium, but due to the event coinciding with the exams, the College administration did not allow us. We could have held the event any other day if not today. This event does not take place in any of the colleges, either Burtuk or Namchi. Even most of the NBBGC members were unaware of the event. It’s a prospect of over 4,000 students, not something that should have been organized between three students. They justify here that the event is not organized by the college, but the guests are the students of Tadong Government College. When the students are here in university uniform, it is wrong.

In the past, the day was also observed as Students’ Rights Day by the student wing of the ruling Sikkim Krantikari Morcha, which however did not happen this year, after a two-year observation. The opposing students claimed, “We are not involved in this event. We never tried to politicize today’s event. We are here to fight for the rights of students as students.